The Climate Agenda and How it is Affecting Landlords

Increasingly stricter rules and regulations are really off-putting for landlords, to the point where approximately 20% of them are planning to sell all or most of their portfolio within the next couple of years. And with a drop in the number of new landlords entering the arena, not enough to replace those who will be leaving it, the future does not look good for this sector of the property market. 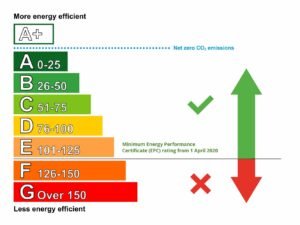 In this article, we will discuss the proposed update to the EPC ratings of property, (the “Minimum Energy Efficiency of Buildings Bill”) and the implications this will have for landlords. What exactly is an “EPC rating”? Well, the EPC, or Energy Performance Certificate, scores a property on how energy efficient it is and gives it a rating from A (most efficient) to G (least efficient). This certificate is then valid for 10 years.

What the government wants to do is to increase the minimum EPC rating a property can have from E, which is currently acceptable, to a new standard of a C rating. “Kamma” is a Geospatial technology company based in London, and they have analysed what effect this will have on the private rented property sector. The alarming fact is that a staggering 2.9 million homes would no longer meet this new criteria, and as it would cost on average approximately £9,872 per home to make the necessary improvements, the property sector could be hit by a bill to the tune of £29 billion! The “Minimum Energy Efficiency of Buildings Bill” would also need to be revised, because as it stands now, there are many unanswered questions and the scope for potential loopholes (due to exemptions) is huge. There is further debate on this bill in UK parliament scheduled for October this year.

all residential properties in the UK

As it stands now, taking all residential properties in the UK into account (not just rentals), 58% would fail to meet the new “C” rating standard. However, when it comes to properties in the Private Rented Sector, 65% of them would fall below standard. And there is now less financial support around from the government to deal with this problem, as they have cut their financial assistance down from the £1.5 billion “Green Homes Grant” to now only £562 million, which is a fund set aside for low-income families to upgrade their homes. Although the government has discussed replacing the Green Homes Grant with an equivalent one, there will still be a huge financial burden placed on landlords to fund all these improvements to their properties. Landlords have already been hit unfairly with increased taxes.

the increased financial burden for landlords

So, what are the loopholes in the new government bill? At present, landlords who have properties that are below the current standard of an E rating need to invest only up to a maximum of £3,500. This means that 120,000 properties can still be rented even though they do not meet the minimum energy rating standard required. And there is also an “all improvements made” exemption, which is for landlords whose properties have run out of viable upgrades and cannot possibly further improve their energy efficiency rating. With the increase in minimum standard from E to C, this will result in an increase in the number of properties that are exempt. As the higher standards mean an increased financial burden for landlords, this could increase the number of exempt properties by a whopping 2.1 million, or 73% of the private rental sector. This is ridiculous, of course. And if the proposal to increase the maximum investment required to £10,000 was accepted, how on earth would landlords be able to afford it? This is just setting the stage for mass non-compliance.

As it stands now, the new proposed energy efficiency standards leave landlords without any support or incentives, and with opportunities for avoidance in the form of loopholes, which will no doubt be exploited. What can be done? This is obviously a huge dilemma, and some sort of a compromise will need to be reached. Obviously, the worst performing properties need to be improved on first, but there needs to be support for all landlords to help them reach the new targets before many more decide it is all too much and leave the sector altogether.